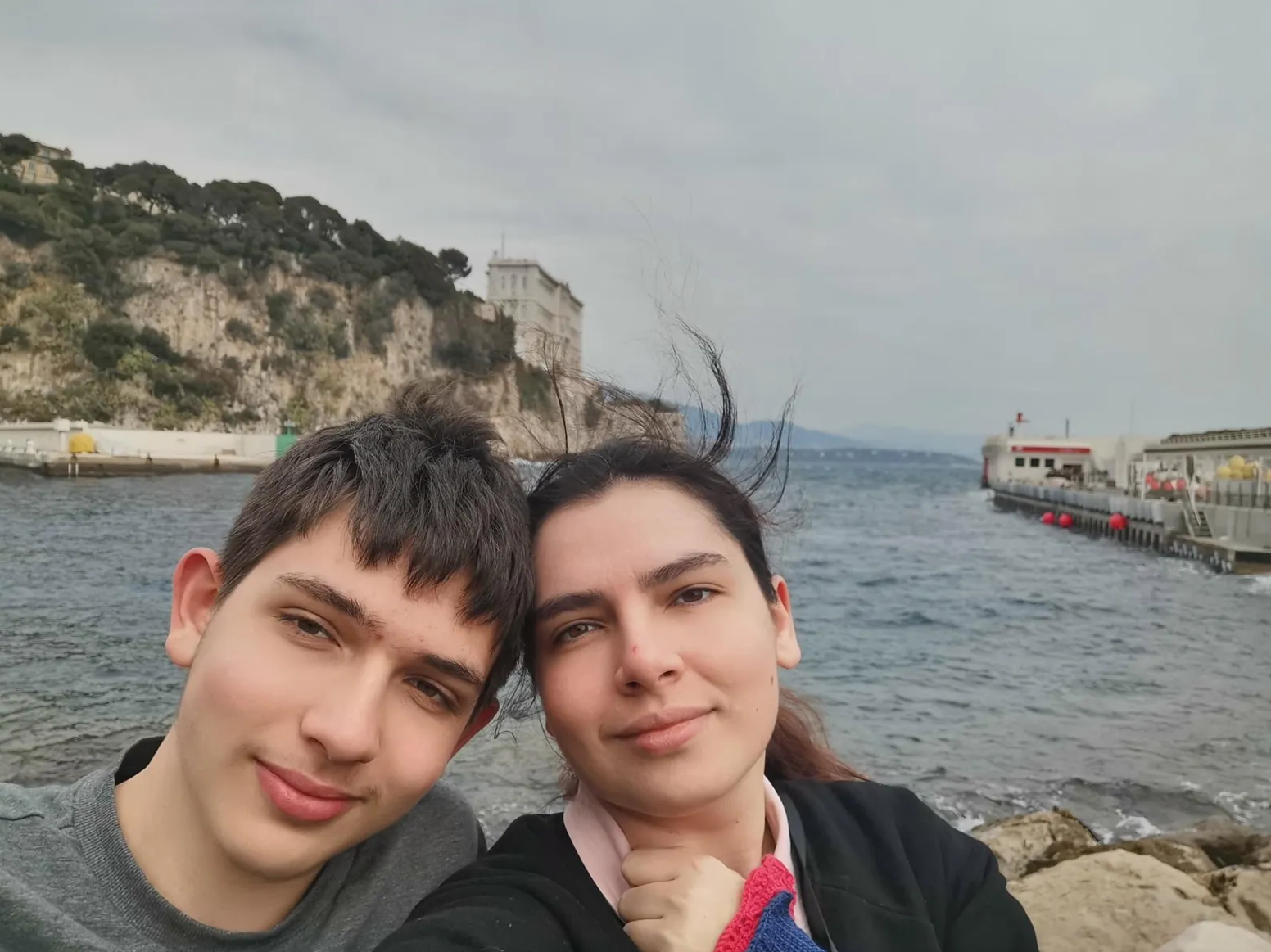 March 17, a date which will live in infamy for Iryna Sergiyenko and her younger brother, Misha. Their lives are forever altered by an unprovoked Russian invasion of Ukraine.

Sergiyenko and Misha, along with their rabbi, fled their war-stricken homeland, escaping the early morning bombings and destruction of buildings nearby in Kyiv. For two full days, the three traveled through Ukraine, mostly at night and on back roads, until they finally found safety in Hungary.

Although the Sergiyenko siblings’ escape might sound similar to that of the millions of Ukrainians who fled Russia’s invasion, it is a bit unique; because 15-year-old Misha is autistic, and Sergiyenko, who is 30, found herself responsible for his safety.

Even in refuge, her responsibilities grew. A caretaker of a teenager with autism, and an advocate for dozens of Ukranians just like her brother.

Sergiyenko is also the director of the nonprofit Child With Future, a foundation started by her mother, Inna, after Misha’s autism diagnosis, supporting people with autism in Ukraine. During the war, the foundation kept going; and even after fleeing, Sergiyenko worked to provide information and assistance to dozens of people, like herself, who fled Ukraine with their autistic and disabled family members.

What Sergiyenko learned, and what she wants the public to understand, is the degree of trauma people with disabilities — specifically, those with autism — endured (and continual issues) because of the war and how the world can help improve their livelihoods.

As a boy, Misha’s family began noticing signs that he was developing differently.

At around two, he stopped talking and making eye contact. When Ukrainian doctors evaluated Misha, they assured the Sergiyenko family he’d be okay– that this was just a phase.

Skeptical, the Sergiyenko’s traveled to Israel to get a second opinion. Here, Misha was diagnosed with autism, or a developmental disorder that changes how people communicate and interact.

When the family returned to their home in Kyiv, they searched for services to no avail. So, Inna, the family’s matriarch, decided to take matters into her own hands.

In 2011, Inna founded Child With Future.

“We do quite a lot of things,” Sergiyenko said. “We work with the government and other NGOs to promote the rights of autistic people of all ages and demand laws to include them.

“For example, inclusion didn’t include autistic people in Ukraine initially; we helped change that.”

Their first project was to create a preschool for children with autism. Eleven years later, they’ve become influential in the disability space in Ukraine, and even across Europe. Sergiyenko started working for her mom’s nonprofit as a director, and the two would travel around Ukraine giving educational lectures about autism. They organized local and international conferences and even started a sports club for autistic teenagers.

“We also started an information technology class in Kyiv for autistic teenagers to help them learn their way around the computer and to help them learn programming and design skills that will be useful to them in the future,” Sergiyenko said. “And we were translating books about autism and literature for parents and schools.”

“And then the war began.”

“My mom burst into my room saying, ‘Wake up! The war has started!’” she said.

At first, the family, including Sergiyenko, Misha, their mother, father, and sickly grandmother who needs round-the-clock care, decided not to flee. Instead, they huddled together in the basement.

“Immediately, we had concerns about electricity, water, food; what will happen?” Sergiyenko said. “We have a big freezer filled with food and basic supplies. So, we figured we had enough to stay at home and go nowhere for a week. We filled the bathtub with water in case the water got cut off and charged everything we could while electricity was working.”

But the week in the basement together ended up being a month. And then family friends and their dog joined.

Weeks in the basement took a severe mental toll on Misha, who felt the pressure and stress of the situation. He could not self-regulate; typically, Misha takes baths to relax, but now he could barely leave the basement. He was also stressed that he couldn’t see his friend for his birthday or play his favorite games. Misha even started rationing his food when he realized his family might be in the basement long term.

“Watching him struggle affected us all,” Sergiyenko said. “We had to tell him he could have bigger portions of food.”

As Russia continued to bombard Ukraine, the Sergiyenko family found themselves in an inconceivable position: should they leave their homeland? Or continue to remain and risk their lives? For them, the answer wasn’t that easy.

Sergiyenko’s father couldn’t leave the country because of his age (men between 18 to 60 were barred from leaving), and her sickly grandmother wouldn’t survive the journey. The family decided that only Sergiyenko and her brother Misha would escape, with their ultimate destination being London, where their cousins lived.

“I didn’t want to leave, but Misha was struggling, and mom saw him struggling more and more each day and shutting down, and she didn’t want him to get worse,” Sergiyenko said.

On March 17, their rabbi picked up Sergiyenko and Misha for the long and uncertain journey out of the country. With fear, but hope in their hearts, they traveled for two full days, barely stopping, before reaching Budapest, Hungry, where they met a relative. Then, they boarded a flight to France, where they stayed with other family members for a month while applying for resettlement in the United Kingdom. Eventually, they were accepted and flew to Oxfordshire, England, where they are today.

“Before we went, dad sat down and gave me a very serious talk. He went over first aid procedures and what to do if we’re being shot at, and what are the priorities? He also talked about where roads were most likely to be mined,” Sergiyenko said. “He said I would have to look where the trees would be and the landscape around me so if anything happens, I know where to go.

“He told me my priority was my life, then my brother’s, and then the stuff we had, and then everything else.”

Even while enduring the trauma of war, Sergiyenko and her mother worked diligently to provide for other autism families.

It began when Sergiyenko received phone calls from parents who fled Ukraine, asking for information and resources to support their children. Because Child With Future is an international foundation, other autism nonprofits around Europe also reached out to Sergiyenko, offering assistance. Sergiyenko began connecting Ukrainian refugees with organizations in their host country.

Sergiyenko created a Facebook group to connect families in need with autism organizations. The group already has almost 4,000 members, including people who fled to places like Poland, Turkey, France, Spain, Moldova, Hungary, Germany, the UK, the Netherlands, and even the United States.

The group also became a sort of job board for autism specialists who fled Ukraine and are looking for work.

“Some organizations have been using the group to collect the statistics of what people need and where they are and use it to send stuff,” Sergiyenko said. “Some organizations have translated autism passports, which is useful.(An autism passport is designed to help people with autism communicate their needs to people who might not understand them, like healthcare professionals, police officers, etc.)

“People are also offering translations for people looking for translators.”

When Sergiyenko isn’t busy connecting people, she is raising Misha.

She is his sole caregiver now.

Her other priority: to spread awareness about the trauma Ukrainian refugees with autism are experiencing.

“Many autistic refugees are now exhibiting a trauma response or a post-traumatic behavior which has completely different management strategies than autism,” she said. “I had a call with one of the parents where she described a behavior, which can be typical for autism, but her son wasn’t doing it before. And it only started after they escaped the war, and the therapists were trying to treat it as an autism thing. And it wasn’t working at all.

“So now, we need trauma specialists who know autism because that’s two things put together, and you don’t really see those specialists– I don’t think they exist.”

More than 14 million people are believed to have fled Ukraine since Russia’s invasion. Autism Europe estimates there were close to 440,000 children with autism in Ukraine, meaning many of those who are now displaced are autistic.

Autism Europe also said people with autism and their families are being overlooked in some cases by humanitarian agencies because of how disability — more specifically, autism — is understood in Ukraine and neighboring countries. As a result, according to the nonprofit, these people don’t have support or access to much-needed services.

Sergiyenko and her network are trying to fill that gap — to provide for autistic people and their families in need. But they can’t do it alone.

To keep up on Child With Future’s efforts, visit their website.

How War and Displacement Traumatize People With Autism