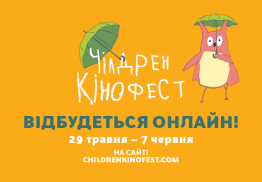 VII Festival of Cinema Art for Children and Teenagers ‘Children Film Festival’ will be held online this year – from May 29th to June 7th on the official website of the festival. The featured movies can be watched free of charge by registering on the website in advance. The mission of the festival is to develop the tradition of family movie viewing in Ukraine and to involve children in the creation of films.

The Festival viewing list includes family-friendly movies, suitable for children over 4 years old. The Children Kinofest team has chosen the best movies from European film screenings for children and adolescents. Young viewers will have a chance to get acquainted with the history of cinema. In the previous years, this historical section presented cinematic pioneers from around the world – Charlie Chaplin, Buster Keaton, Lotte Reiniger, Georges Méliès, and the Lumiere brothers. The festival program can be found here.

‘Children Film Festival’ winner will be chosen by the audience after watching all the competition films. Viewers will be asked to rate their impressions.

The 4th children’s film competition, announced in the fall of 2019, collected more than 220 applications from all over Ukraine. 5 finalists in two categories – ages 7 to 10 years old and ages 11 to 14 years old were selected among them. The leaders in terms of application numbers were Kyiv, Kharkiv, Dnepropetrovsk, and Lviv regions.

Musician, producer, songwriter, and frontman of the ‘Boombox’ group Andrey Khlivnyuk became the honorary ambassador of the festival in 2020.

Autism and coronavirus: Ukrainians got the opportunity to take part in a pan-European survey

Why do autistic people try to control the situation: online seminar available now