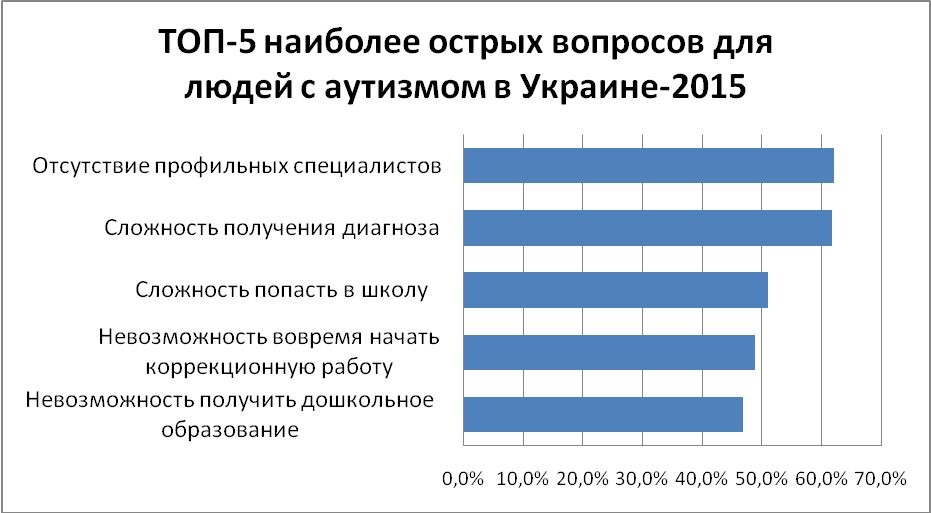 International Foundation “Child with a future” (Kyiv, Ukraine) summed up the public survey results about autism in Ukraine at the beginning of 2015. 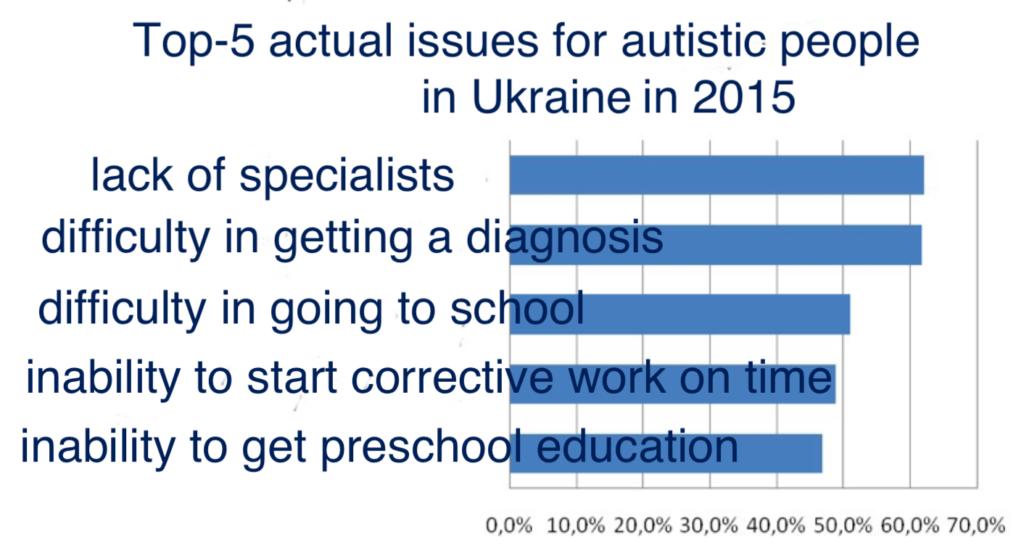 Meanwhile, the number of autistic people in Ukraine remains unknown due to the lack of statistics, diagnostic difficulties, and all other problems that are common to the state, which recently only recognized the problem’s existence. There was no autism in the USSR: autistic children were simply diagnosed with «schizophrenia».

There were no statistics about autism in Ukraine in 2014, and the existing data do not reflect the real state of affairs and contradict each other. There are 3200 people with autism who are officially living in Ukraine, according to the Ministry of Health. But in fact, the real number is higher, according to the social organization’s data.

The above-mentioned are only the tip of the iceberg. The real problems begin in real life, where parents of children with special needs have to live and fight for the children’s health and rights every day.

This is probably the main reason for this survey’s importance. 24 social organizations and more than 120 parents of autistic children from all regions of the country took part in the survey (organizations and parents of Crimea, Donetsk, and Luhansk regions did not participate).

We do not pretend to be the ultimate truth. But we consider it extremely important to draw public attention and the expert community to its findings.

Concerning Ukrainian parents, the lack of specialists with the necessary knowledge and skills is the first problem. It was stated by 61% of respondents. This is due to the lack of real statistics of the autistic people in Ukraine. That’s why the problem is downplayed.

This explains why there was no need to train to work with children with a “non-existent” diagnosis before and does not now in Ukraine. No need, no motivation. And that’s why a lot of teachers do not really know anything about autism. Students are only superficially acquainted with this concept, but how to practice with such children in Ukrainian higher education institutions is not taught at all.

Most of all there is a lack of qualified speech therapists and defectologists, who understand the work specifics with a special child, according to the survey results.

The difficulty to diagnose is the second related problem in Ukraine. This is due to the same lack of knowledge among specialists. The doctors are not taught enough to work with autistic children and are not even familiar with the classic disorder features.

Some doctors still equate autism with schizophrenia in the best traditions of Soviet medicine, but such cases are no longer systemic. “Your child will outgrow it” is a phrase parents often hear. Many of them perceive such “soothing therapy” until the child has to go to school, but the problem has not gone away. Parents start to sound the alarm, but precious time is wasted: therapy for autistic children is effective at an early age – up to 7 years old. The second most important problem was to obtain a timely diagnosis, according to 61,7% of the respondents.

“It took us two years to prove the baby’s problems to doctors. The pediatrician still closes his eyes and is afraid to communicate with us,” tell the parents of a special child.

Half of the respondents said it was difficult to get into school (51%) and impossible to start therapy on time (48,9%). The impossibility to get pre-school education is emphasized by almost the same number of respondents (46,8%).

All three points could be reduced to one – the lack of necessary educational conditions for autistic children. Only a few can get it in Ukraine today. Inclusive education exists only on paper. Schools are unwilling and unable to take autistic children. They have no idea what to do with autistic children and there is no incentive system for teachers.

There are positive examples too. But it is rather the exception to the rules that confirms the rule – systemic issues are not resolved in Ukraine.

A survey showed that there is a catastrophic shortage of specialists, problems with early diagnosis, and the officials’ lack of interest in helping to solve autism issues in Ukraine today.

Europe and the United States are already working to make life better for autistic adults, but we are talking only about normal conditions for children at schools and pre-schools.

In fact, the Ukrainian executive and legislative authorities have made substantial progress in this direction for recent years. It is substantial, but not sufficient. And this must be recognized as a fact. 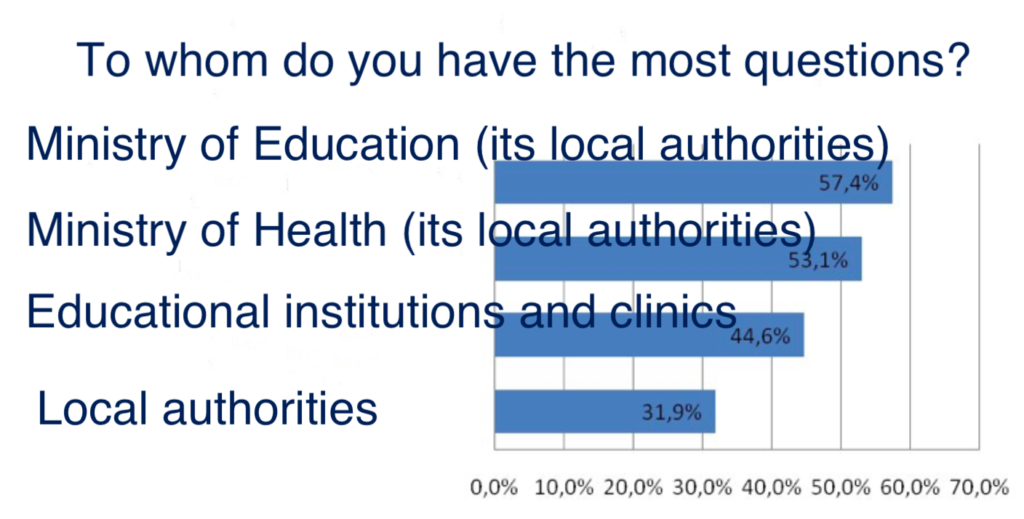 It is noteworthy (attention!) that most of the questions were directed to the Ministry of Education (57,4%) and the Ministry of Health (53,1%) among the survey participants. Third place was given to educational institutions and polyclinics (44,6%) and the fourth place got local authorities (31,9%). These data are logical: people understand that it is impossible to change the situation at the local levels without the adoption of decisions at the state level.

The picture of government involvement in autism would be incomplete without an assessment of the financial issues. The majority of respondents in the «Other» section recognized the money issue as the cornerstone. In general, the solutions to all problems have the same cost as any changes in our life.

The lack of statistics does not even allow to say theoretically how much resources are needed for the “effective problem solving” in Ukraine in 2015. Although it would be the easiest way for someone. But it is populistic to operate with fixed numbers on an issue that spans decades, as well as to demand funds from the Government of Ukraine is practically blackmailing in 2015. We think the State could provide some means to address current issues today. But it is strategically more important to feel its willingness and desire to be our reliable partner. It is not so little to recognize the problem’s importance, provide conditions for autistic people, stimulate and motivate domestic and foreign sponsors. It is not so little to participate in providing existing resources in order to face the Ukrainian autism community. And how much is this…

We also decided to measure the attitude of the Ukrainian society to the problem of autism proceeding from the well-known “Democracy is the attitude of the majority to the minority” phrase. We obtained quite encouraging results, contrary to the traditional inertia of public opinion.

Thus, one of every fifth of the respondents stated that Ukrainian society became more tolerant (!) in 2014. Almost every fourth felt an attitude change towards their problems from the Ukrainian authorities representatives during the same period. 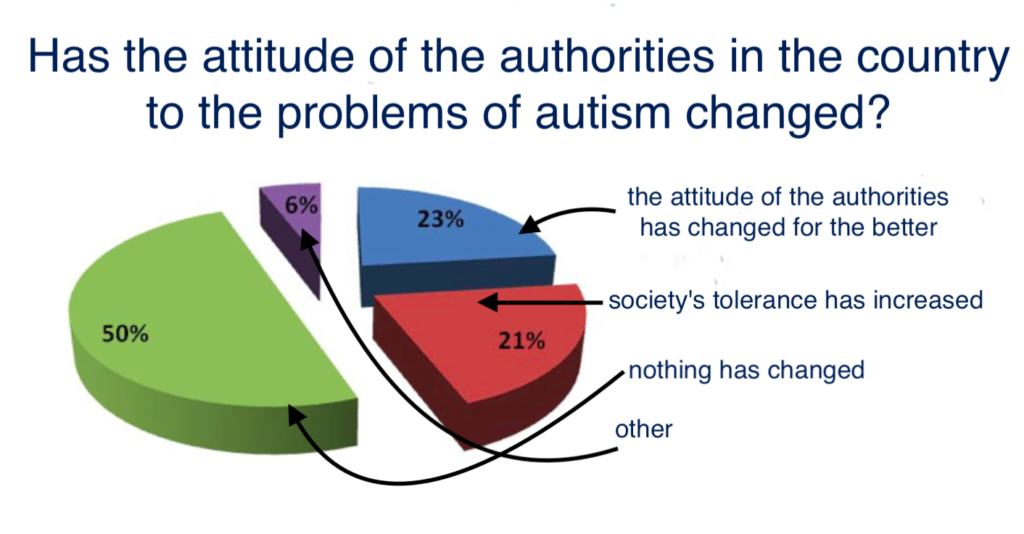 The data are yet another confirmation of tolerance, awareness, and readiness of Ukrainian civil society to be an integral part of the civilized world in a view of the extremely difficult situation with aggression in the South-East of Ukraine. Thus, 50% of the survey participants, who “did not feel any changes”, only confirm the necessity to continue the work. For whom?

Ukrainian parents and social activists have already achieved significant progress in this area over the last years (2010-2014). The Ministry of Health’ decision to recognize the “adult” autism, the allocation of funds by the state to the needs of autistic people, teaching aids, the working group on solving autism problems, the first parliamentary hearings on autism in Ukraine, international dialogue and experience exchange are among the achievements. Ukraine won the INAP 2014 – Natural Autistic People Awards (Edinburgh) for the first time in 2014.

And this is only part of the opportunities that are beginning to open up for the special children in our country. Thanks to the active participation of parents, voluntary organizations, the media, and the whole Ukrainian society we have managed to draw attention to autism. People have become more open and tolerant. They have realized that the problems of families raising autistic children are not just their internal problems. These are the problems of the whole society.

Public organizations continue fighting for people with autism despite the difficult situation in Ukraine. A major information program is underway to reach as many clinics as possible with posters about autism. There are more and more trainings about autism for specialists. A unique “TEACCH-course” organized by “Child with a future” Foundation in cooperation with the “Kolping in Ukraine” Consulting Center for autistic persons and Lviv Ivan Franko National University is among them.

Parents and activists look forward to reform the education and health-care system. They are ready to cooperate with civil society, the media, and voluntary organizations to bring the problem of autism to a new level in Ukraine.

CONTACT WITH CATS IS USEFUL FOR AUTISTIC CHILDREN – RESEARCH

THE SITUATION WITH AUTISM IN UKRAINE IS IMPROVING – SURVEY 2019